Something about Bowling ( Chapter I )

Bowling is a sport or leisure activity in which a player rolls or throws a bowling ball towards a target. It is one of the major forms of throwing sports. In pin bowling variations, the target is usually to knock over pins (10 pins) at the end of a lane. A strike is when all the pins are knocked down on the first roll, whereas a spare is when all the pins are knocked over on the second shot. The maximum score is 300, which is achieved by getting 12 strikes in a row. Three consecutive strikes are known as a "turkey". Further strings of strikes are referred to as the number with the word "bagger", such as "four-bagger" for four consecutive strikes. The term "hambone" has also been used to describe four consecutive strikes. In target variations, the aim is usually to get the ball as close to a mark as possible. The pin version of bowling is often played on a flat wooden, or other synthetic, surface (which can be oiled in different patterns for different techniques). In target bowling, the surface may be grass, gravel or a synthetic surface.  The most common types of pin bowling include ten-pin, nine-pin, candlepin, duckpin and five-pin bowling. In target bowling,bowls, skittles, kegel, bocce, carpet bowls, pétanque, and boules, both indoor and outdoor varieties are popular. Today the sport of bowling is played by 100 million people in more than 90 countries worldwide (including 70 million players in the United States), and continues to grow through entertainment media such as video games for home consoles and handheld devices.

Bowling in the United States and Canada usually refers to ten-pin bowling. In the United Kingdom and other Commonwealth countries it tends to refer to lawn bowls. 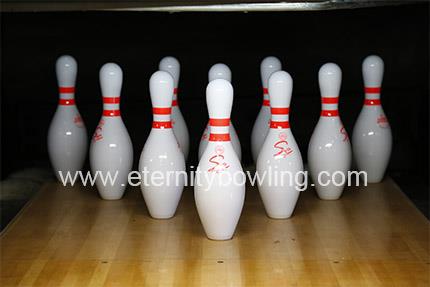 The earliest known forms of bowling date back to ancient Egypt. Remnants of balls used at the time were found among artifacts in ancient Egypt going back to the Egyptian protodynastic periodin 3200 BC. Balls were made using the husks of grains, covered in a material such as leather, and bound with string. Other balls made of porcelain have also been found, indicating that these were rolled along the ground rather than thrown due to their size and weight. Some of these resemble the modern day jack used in target bowl games. Bowling games of different forms are also noted by Herodotus as an invention of the Lydians in Asia Minor.

About 2,000 years ago, in the Roman Empire, a similar game evolved between Roman legionaries entailing the tossing of stone objects as close as possible to other stone objects, which eventually evolved into Italian Bocce, or outdoor bowling.

Around 400 AD, bowling began in Germany as a religious ritual to cleanse oneself from sin by rolling a rock into a club (kegel) representing the heathen, resulting in bowlers being called keglers.